For years there had been conversations around the Sacramento Valley around why there was no marquis male barbershop chorus. Top notch perfomers found themselves accepting a long commute to th The Noahse Bay Area each week in order to be able to sing at a world-class level. Then, in the Fall of 2009 that all changed. Through the simultaneous relocation of several barbershop luminaries and the serendipitous availability of a handful of other talented local gems, that fall suddenly brought together a nucleus of 10 men with the intention of founding a new chorus in the Sacramento Valley that targeted singers with high skill or talent levels who were willing to invest the personal time necessary to be part of a world-class performing ensemble. The chorus was to be named the American River Chorus (ARC), as the performing entity of the California Delta Chapter of the Barbershop Harmony Society. The 10 founders came to be known as "the Noahs" (a not-so-veiled Ark/ARC reference) and set about that fall and early winter in defining the chorus culture, iniital repertoire, leadership roles and all of the logistics associated with establishing a new legal musical entity (performance space, getting risers, incorporating as a business, gaining notprofit status, naming a board, establishing a budget,etc.).

As the planning rounded to completion in December of that year, the word went out of the initial chapter 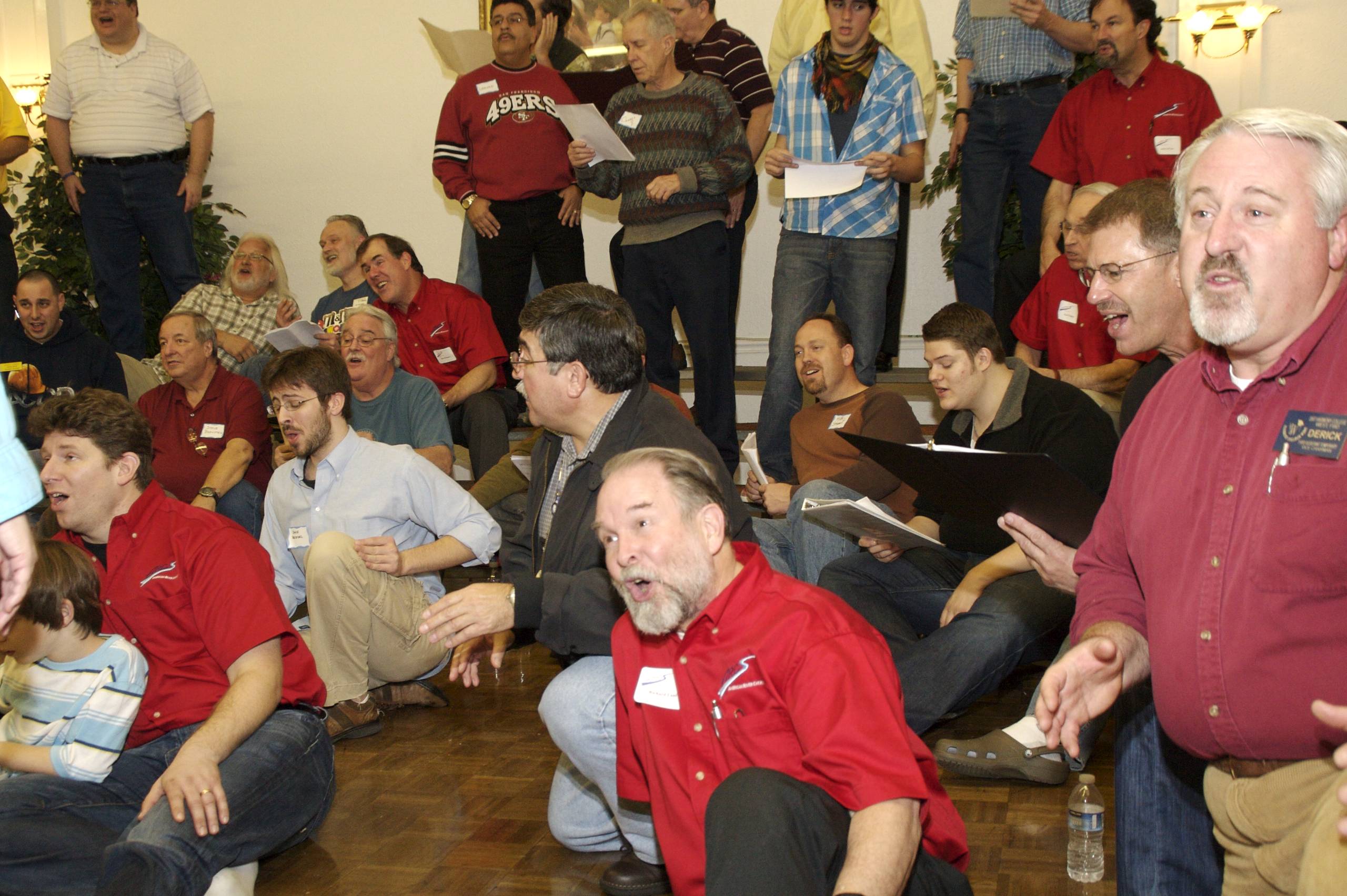 The First Rehearsalmeeting of this new chorus on January 6th, 2010, with Gabe Caretto as the director and Ron Black as the associate director. That first rehearsal was held at Kobasic's Hall in Sacramento. It was a former grocery store turned into a combination candy manufacturing operation, candy store and attached banquet hall. Kobasic's proved to be our home for the first 2 full years of operation. At the first rehearsal there were 83 men present. Many of them were just well-wishers from other choruses, but a key core was identified. The charter members of the chorus, approved on January 10, 2010 were:

That first version of the chorus harnessed all of the excitement and goodwill and used it to tackle a few pressing near-term goals.  On March 13th, 2010, ten weeks from the initial meeting, the chorus took the stage in Reno, NV and won their very first contest, being named the champions of the NorthEast Division of the Far Western District.  The iniitial two contest songs were "Somebody Loves Me" and "If I Only Had a Brain". 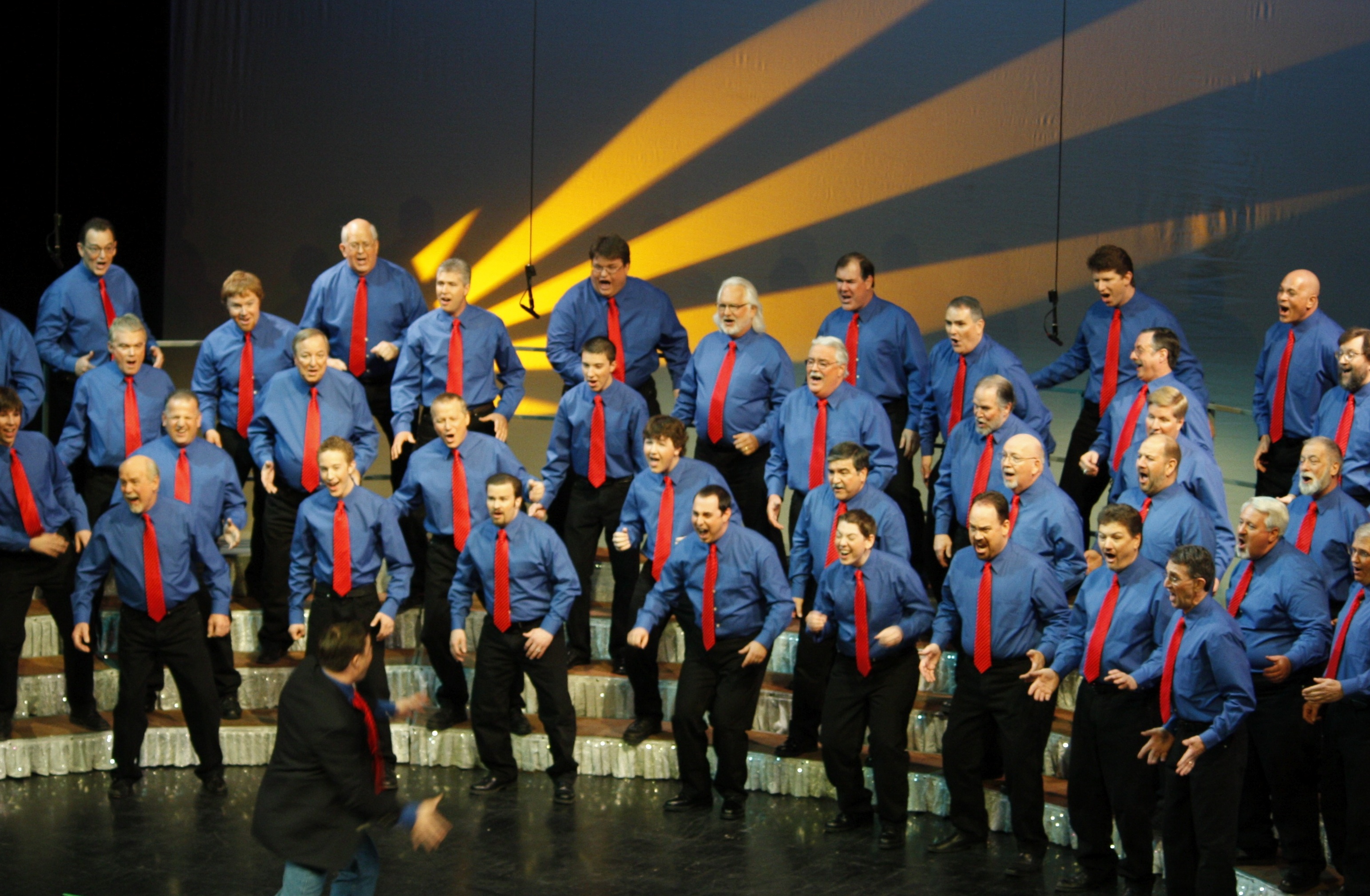 All efforts then went towards preparation for the first annual show, which was slated for only 10 weeks later.  In addition to the two contest songs they already knew, the chorus members needed to learn 9 additional songs for that first show.  Internationally renowned visual artist Cindy Hansen flew out to help choreograph several of the numbers.  In addition, she ultimately came back out for three full days before the show to help all the small ensembles and front row learn their choreography.  It was only through this extra effort that the chorus was visually prepared for their audience. It all culminated in our first show, produced at Hiram Johnson Auditorium on June 5, 2010 and called the Great American Songbook.

In addition to the chorus, the show featured two of the hottest groups in barbe 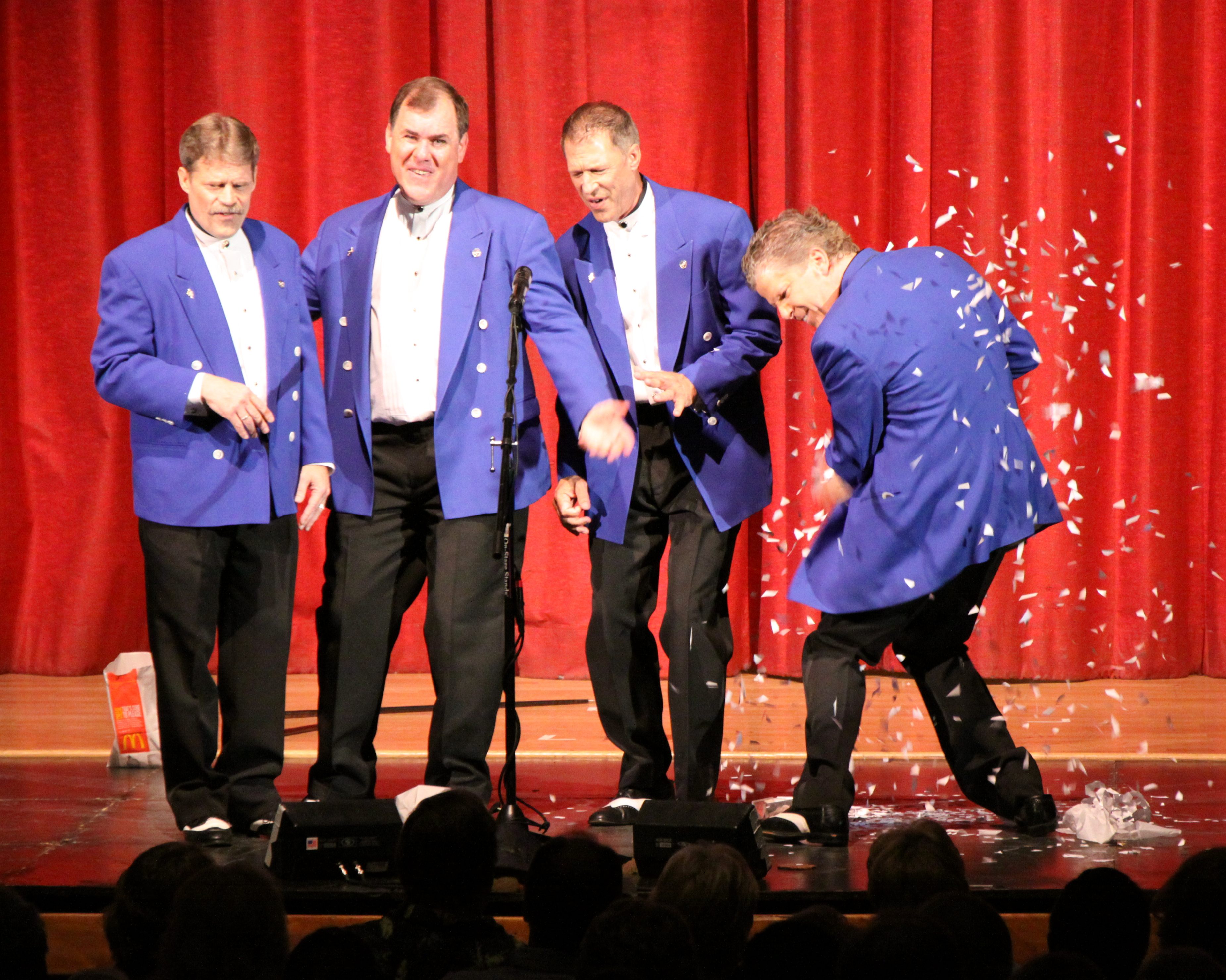 rshop at that time.  One was the Sacramento-based, but nationally loved comedy group named Freestyle, who had retired from performing a few years prior but agreed to come out of retirement specifically for this special event.

The headliner was the incomparable 2009 International Champions, Vocal Spectrum, who were at the very top of their game and were singing new arrangements by David Wright that were truly "off the charts".

When bundled together with the chorus show, which featured numerous fully-choreographed numbers, this really was a new standard for barbershop in Northern California.  Highlights for the chorus in the sho 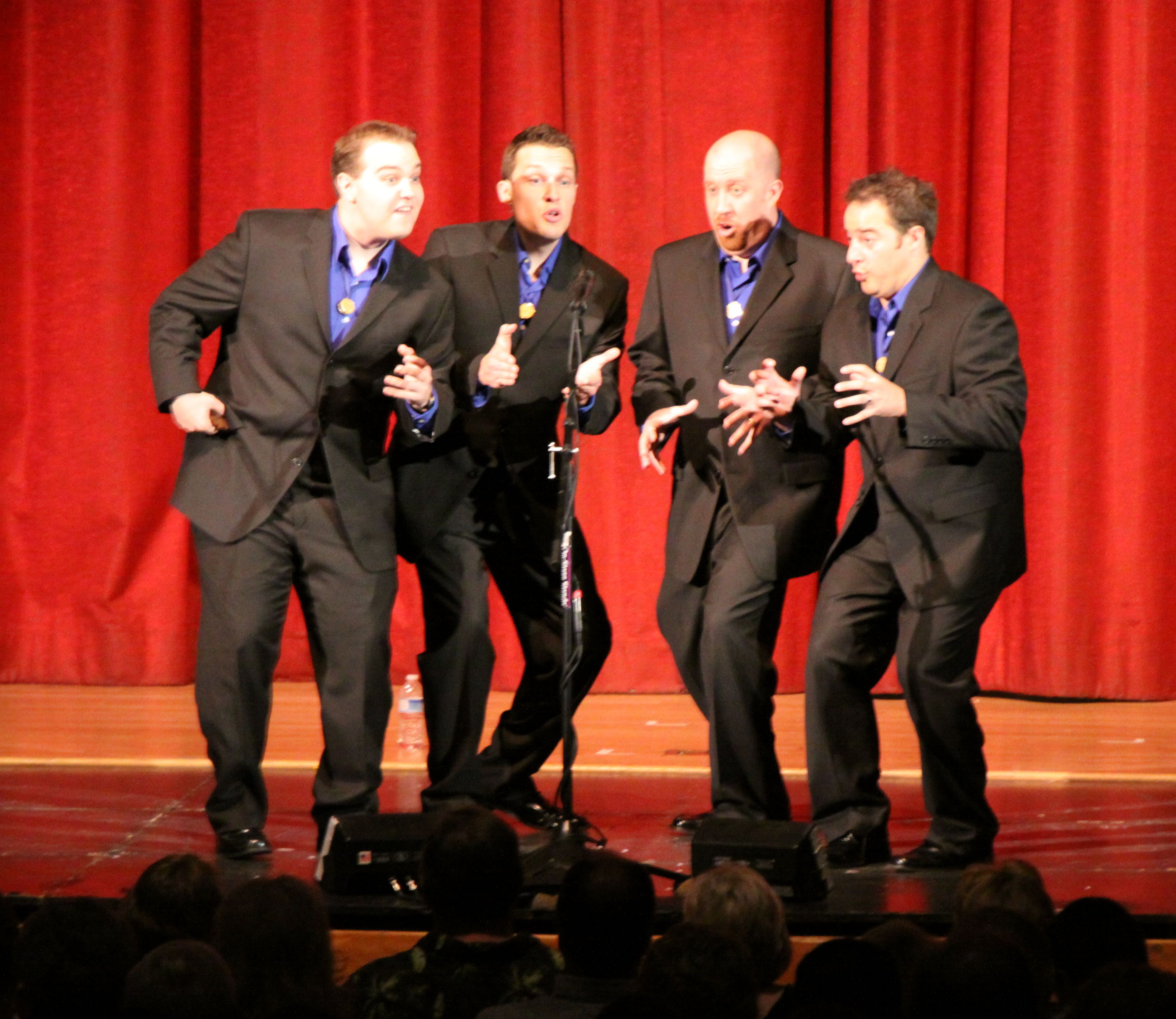 w were "Puttin On the Ritz (with a full top hat and cane routine) and the Cole Porter Medley, which featured numerous percussive instruments as well as a bevy of young college-age singers featured in solos and quarterts.  Two other highlights were Jordan Litz (former lead of District Champ late Show) singing the feature part on "All the Things you Are" while making his way from off stage across stage and then up all the way to the highest point of the scaffolding, all while being drowned in a matinee idol follow spot.  The finale was also a highlight, as it featured both Freesty;e and Vocal Spectrum singing from balconies on opposite sides fo the stage, accompanied dramatically by the chorus on "Song of America".   With fully scripted dramatic lighting and a professional sound array, the production values of this show made it clear that VoCal considered themselves a theatrical performing group, not just a chorus.

The annual spring show VoCal show has become a highlight of the Sacramento musical arts scene, as each year the chorus continues to put on a high caliber show with amazing guest talent and first rate production values.  For a list of past annual shows and perfomers, please see here. 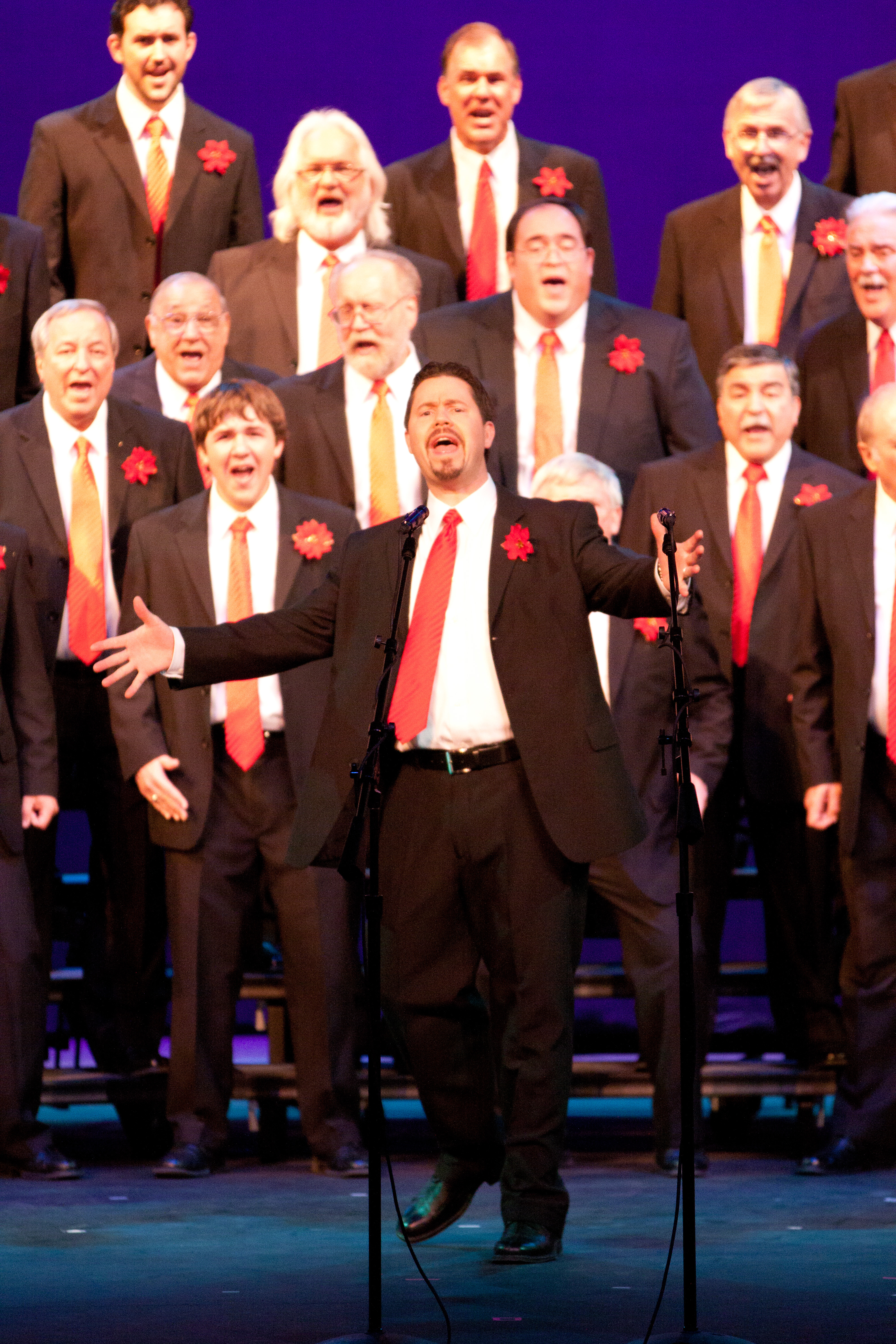 w the first instance of the Annual Vocal Holiday Show.   This show is produced by VoCal at the Harris Center in Folsom, but features a variety of choruses and music ensmbles frmo throughout the community.  This format was selected to provide an opportunity to share the stage with other performers with whom we might otherwise get to see/hear.  Secondly, it porvides a very interesting variety in teh performances that are offered to our audiences.   For a list of our past holiday shows and guest performers, please click here.

2013 Brought about a name change from American River Chorus to Voices of California (VoCal).   The original name, while great within barbershop circles, posed a challenge in local branding, as there is a large community college in the Sacramento Valley called American River College (ARC) with lots of performing groups.  Also in this year, VoCal actively weighed a merger with the Sacramento Capitolaires, but this combination was put to a vote of both ememberships and all involved agreed it was best to remain distinct.

From the very beginning, competition has always been an inportant part of what VoCal is about.  While our primary goals is to entertain our audiences, competition provides an oibhjective opoportunity to measure our success at doing that and also, of our artistic growth over time.  The chorus has won the NorthEast Divisional contest every year since our inception.   VoCal's contest sets tend to be theme-oriented, ensuring there is entertainment value even in the contest setting.  Prior themes have included "Scarecrows in a Field", "Secret Service Agents at a Rally", and "Chefs in the Kitchen"In 2013 VoCal became the first male chorus in the over 65 years of barbershop singing in the Sacramento area to qualify to sing at the International Championships, which were held in Toronto. In that first international competition, Voices of California finished 17th in the world.

Sign up for our newsletter to receive the latest news and event postings.